We start our discussion about the dynamics of Rabe’s Ridge with a toast. Hoist a brew in appreciation of Mike Rabe, the early Woodrat hang glider who pioneered much of the early exploration of the ridge above China Gulch. Flying from Woodrat in the early 1980’s, he spent so much time over there that the ridge was named for him. Thanks Mike for your inquisitive and bold exploration! We are all indebted to you.

As Yogi Berra said, “You can observe a lot just by looking.”

TOPOGRAPHY:
The first element in trying to understand the dynamics of Rabe’s Ridge lies in its orientation. It is a catchment basin aligned towards the Southwest. It starts catching the full force of the sun’s heating very early in the morning and continues throughout the day. It is surrounded by higher terrain on three sides and therefore the trapped heat tends to stay within the gulch until it is either released in the form of a thermal or successfully works its way out of the gulch in the form of up slope flow.

VALLEY WINDS:
Consider the normal West up valley wind flow. Two sections from the MetEd site, Flow Interaction with Topography and Thermally-forced Circulation II: Mountain/Valley Breezes provide help in understanding how valley flow develops during the daytime. It is very important to realize that valley flow starts below ridge top levels but when fully developed, can extend up well above the valley sidewalls sometimes by a thousand feet or more feet. A simple illustration can be found in a loaf of bread. It starts out as a lump of dough that is below the pan height but as it bakes, it expands up and over the sides of the pan. Valley winds are similar. The important thing to realize is that valley winds can have a lower and upper level aspect to them. The lower aspect wind is below the valley rim and follows the contours of the valley as it winds its way towards higher terrain. The upper level valley winds, those above the sidewalls but below the larger regional winds, can skip over some of the bends and twists of the valley’s topography and then reunite with the lower level flows as it progresses towards the higher terrain. Above them are the larger scale winds. Here are a couple of maps to illustrate this.

The following picture is an attempt to show the lower level West up valley flow with the smaller upslope flows. 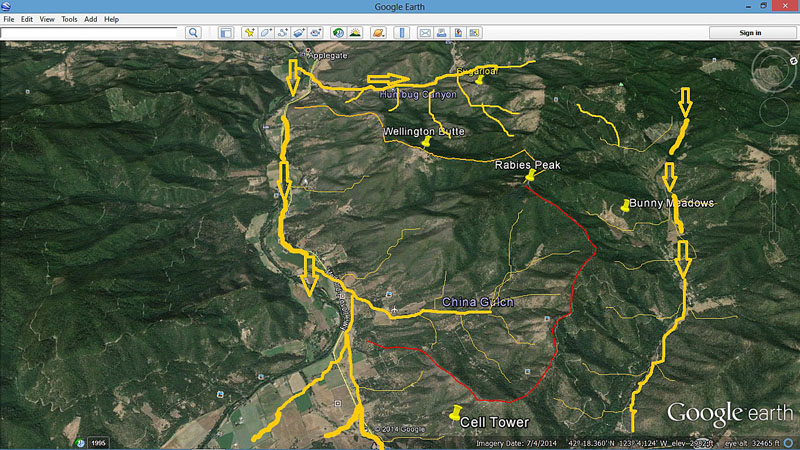 If we add in the upper level valley flow we get something like this: 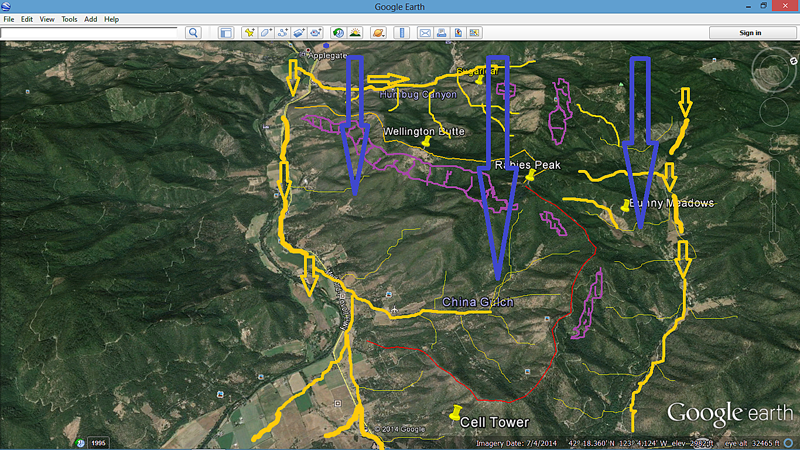 This is an attempt to show the complexity of a typical West up valley flow. The lower flow and the slope flow is marked in yellow. The upper valley flow is represented by the large blue arrows. The resulting rotor that occurs as the upper valley flow interacts with the terrain is the light purple sections.
The predominate up valley flow from the West is both compressing the air into the gulch in its lower level form and, more importantly, on a typical West flow day, is spilling over the higher ridge outlined in orange and flowing down and across the lower valley flow in the China Gulch areas as upper level valley flow. This has a number of important considerations when we try to understand what is happening when we fly Rabe’s Ridge.

INTERACTION OF TOPOGRAPHY AND VALLEY FLOW:

The interaction of up valley wind flow and topography turns the China Gulch area into an almost perfect thermal nursery. The importance of the split level valley wind flow, with the upper level flow being temporarily at an angle to the lower flow, is that for all intents and purposes, China Gulch is a lee side catchment basin. This has several important impacts on the relatively stagnant air mass within China Gulch. As air flows downhill there is an incremental increase in heating throughout the gulch. Additionally, the lee side of a ridge or mountain develops a micro-level low pressure system. The net effect of that low pressure is an increase in instability. This translates into a hotter air mass that is being encouraged to rise by the lower pressure differential.
Basically China Gulch becomes a super adiabatic thermal generator. Compared to other surrounding areas it releases thermals more frequently and of a greater relative strength than does more windswept areas or areas with more of a homogenous valley flow. We see the effects of these super adiabatic thermal releases almost all the time while flying Rabe’s Ridge. We usually climb 500 to 1000 feet higher along the ridge than we do elsewhere. This is a direct result of these more potent thermals emerging out of China Gulch.

1. There are NO SAFE landing zones inside of China Gulch! You have to either climb out or leave yourself enough height to return to Hunters or Longswords. There have been a number of broken bones and torn up gliders that have resulted from ignoring this.

2. Don’t get below the ridges! See #1. If you get below the ridges, you run a good chance of encountering the upper level valley flow as it interacts with the terrain. Alternatively, you will be possibly exposing yourself to a super adiabatic thermal close to the ground. It is okay to scream if you ignore this advice and encounter one.

This picture shows most of the known rotor areas that develop on a typical West up valley flow day. The size and the intensity of the rotor areas are directly tied to wind speed. The stronger the velocity, the more intense the rotor is going to be. Basically, avoid flying below ridge level while in China Gulch especially in the Wellington Butte to Rabe’s Peak area and in the Rabe’s Peak to Sugar Loaf area.

3. There is often an amazing amount of bubbly lift and its associated turbulence drifting along Rabe’s Ridge as the two levels of valley flow merge. It often feels like weaker bits and pieces of wandering thermals between the pronounced thermals. I often think of it as the Rabe’s Ridge flak zone. Like some old World War 2 bomber flying through a flak field, my glider shudders and surges as I go questing up towards Rabe’s Peak in search of a coherent climb. Then, boom, there‘s the mothership! My point is, make sure that you are really in a developed thermal before you start turning. Additionally, it is not uncommon to start climbing in a upslope flow thermal along Rabe’s Ridge towards the West and then enter into the upper level valley wind and find yourself being pushed towards the East. Frequently, you have to stair step your way towards Rabe’s Peak. You push forward into the thermal and then as it climbs up into the upper level valley winds, you drift back towards Woodrat or Burnt and then push forwards towards Rabe’s Peak again and catch another thermal further up the ridge and repeat.

4. It is possible to get too much of a good thing. Sometimes the super adiabatic thermals can just be bigger than I am willing to eat or try to drag home. Some days I just need to cut and run. It is like the old Kenny Rogers song “Know when to hold them, know when to fold them, know when to run away”. Fly within your comfort zone and realistically know your own limitations.

5. A fun part of flying Rabe’s Ridge is the fact that the upper monsoonal flow over the whole region during the summer is from the South. It makes it possible for us to frequently climb through both valley layers while thermalling on Rabe’s and climb up into the South flow. Sometimes this makes it possible to fly to Grant’s Pass with a tailwind as long as we are above the valley winds, then fly back to Woodrat at a lower level with a tailwind using the upper level valley flow. Tailwinds in both directions but at different altitudes. Sweet! For non XC pilots, the ability to sometimes climb to 10,000 feet on a good day is its own reward.

6. Rabe’s Ridge on a North wind influenced day is for experienced pilots only. As a North wind develops and makes its influence felt, the lift coming out of China Gulch is driven off of the ridge as the North begins to exert itself. A Northerly wind creates a nasty sheer as the lower level up valley flow clashes with the North. As it swings more, past 330 degrees, the sheer gets very pronounced. In the 2014 Rat Race, we had the most ever reserve tosses within a period of days. A weather comparison looking at Medford airport winds for the period 2008-2014 revealed that one of the primary differences between 2014 and earlier years laid in the high number of days with the wind flow exceeding 320 degrees. Rabe’s Ridge on Northerly days yields significant turbulence and isn’t that enjoyable.